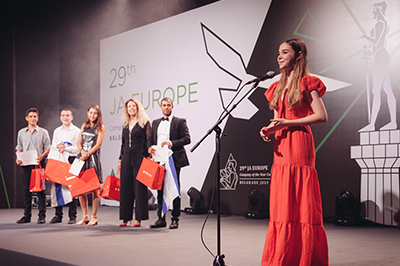 Team Create, from Israel, has been named winner of the Delta Innovation Award 2018.
The company produces “Notify”, a phone holder for cars that prevents receiving notifications while driving.
39 national delegations representing 200 young people competed for this award during the JA Europe Company of the Year Competition in Belgrade, Serbia, on 18 July 2018.

Junior Achievement Europe has announced that Create, a student-run company from Israel has won the first ever Delta Innovation Award.

Create won the Delta Air Lines award after demonstrating excellence in a number of core areas. The judges, led by Shane Spyak, Delta’s Staff Vice President – Europe, Middle East, Africa and India Sales, cited their ability to develop an innovative yet user-friendly product that promotes safer driving. The students designed and manufactured an in-car mobile phone holder that blocks distracting notifications being received, such as SMS messages, while enabling the use of navigation systems.

Shane Spyak said: “The Delta Innovation Award offers a great opportunity for us to inspire and be inspired by these young and brilliant minds. I was particularly impressed with the innovation demonstrated by Create, and the global potential of their business, which provides an innovative safety solution.”

“It’s amazing, we’re very excited to have won the Delta Innovation Award. With our product Notify, we wanted to address this issue of texting while driving and increase safety. The support of companies like Delta Air Lines helps young people like us to believe in themselves and realize that they can make a change in the world and be recognized for their innovation,” shared Aya Haimovich, CEO of Create.

All the students who pitched their products at the JA Europe Company of the Year Competition have been taking part in JA’s flagship Company Programme over the past academic year. The Company Programme empowers young people to set up and run a real business, making all the decisions from deciding on the company name and product, to creating a business plan, managing their finances and selling their products. More than 340,000 young people took part in the programme this academic year creating over 30,000 mini-companies.

Through a partnership with Junior Achievement that now spans over 30 chapters on four continents (North America, South America, Europe, and Africa), Delta helps ignite an educational spark in more than 810,000 students each year.

About Delta
Delta Air Lines serves more than 180 million customers each year. In 2018, Delta was named to Fortune’s top 50 Most Admired Companies in addition to being named the most admired airline for the seventh time in eight years. Additionally, Delta has ranked No.1 in the Business Travel News Annual Airline survey for an unprecedented seven consecutive years. With an industry-leading global network, Delta and the Delta Connection carriers offer service to 324 destinations in 57 countries on six continents. Headquartered in Atlanta, Delta employs more than 80,000 employees worldwide and operates a mainline fleet of more than 800 aircraft. The airline is a founding member of the SkyTeam global alliance and participates in the industry’s leading transatlantic joint venture with Air France-KLM and Alitalia as well as a joint venture with Virgin Atlantic. Including its worldwide alliance partners, Delta offers customers more than 15,000 daily flights, with key hubs and markets including Amsterdam, Atlanta, Boston, Detroit, Los Angeles, Mexico City, Minneapolis/St. Paul, New York-JFK and LaGuardia, London-Heathrow, Paris-Charles de Gaulle, Salt Lake City, São Paulo, Seattle, Seoul, and Tokyo-Narita. Delta has invested billions of dollars in airport facilities, global products and services, and technology to enhance the customer experience in the air and on the ground. Additional information is available on the Delta News Hub, as well as delta.com, Twitter @DeltaNewsHub and Facebook.com/delta.

About JA Europe
JA Europe is Europe’s largest provider of entrepreneurship education programmes, reaching 3.6 million students in 40 countries. JA Europe brings the public and private sectors together to provide young people in primary and secondary schools and early university with high-quality education programmes to teach them about enterprise, entrepreneurship, business and economics in a practical way. www.jaeurope.org